ART- the use of skill & imagination in the production of things of BEAUTY
Video of RaheNi singing a Mexica Water Song for a Zoom circle with Spirit Root Medicine People: Indigenous Two Spirit Lifeways (Spring 2021 - Ohlone Territory)
​
RaheNi Gonzalez is a Two Spirit Afro-Boricua Taino Ceremonialist, Sacred Artist, Healer & Activist. They were born in Lenape Territory (Brooklyn, NY) & currently reside in Huichin, Ohlone Territory (Oakland, CA). RaheNi is deeply committed to the work of healing our collective wounds of colonization, modernization & industrialization. They are passionate about creating sacred space & altars for the facilitation of ceremonies rooted in indigenous wisdom. They are blessed to have been walking on the Red Road for over two decades. RaheNi is a facilitator for Spirit Root Medicine People: Indigenous Two Spirit Lifeways, a wellness project for the Indigenous Two Spirit/QTBIPOC Community based in Huichin, Ohlone Territory. They are also a core member of the Healing Clinic Collective, a Huichin based grassroots healing justice project offering free healing services to the community. RaheNi teaches workshops focused on healing & self care rooted in indigenous medicine ways & ancestral remembrance. They have taught meditation in many settings including prisons and to women with cancer. As a caregiver, they have helped many in their journey to the other side. They have completed a year long Mindfulness Yoga & Meditation Training, a year long intensive in Commit to Dharma and a year long intensive in the North American Nonviolent Communication Leadership Program. RaheNi has over 2 years of accumulated silent retreat practice, they have completed 4 traditional vision quests & 20+ years of indigenous ceremonial practice & vipassana practice. They are also a Master Gardener & Indigenous Permaculturist. ​ ​
​
FOR CURRENT INFORMATION ON WORKSHOPS, EVENTS & CIRCLES, PLEASE CHECK MY INSTAGRAM PAGE & MY LINKTR.EE
My instagram
my linktr.ee

​In March I was honored to offer the opening prayer/opening of the directions for the Healing Clinic Collective's "Gender Justice Training"
​Spirit Root Medicine People: Indigenous Two Spirit Lifeways continued to offer monthly circles. In September we were one of 8 groups awarded the Belonging In Oakland: A Just City Cultural Fund two year grant! Below Image is of a "hybrid" in person/zoom circle we had in May called "What Are You Birthing." This circle was sponsored by the Intergalactic Council Of Midwives. In this sacred circle we discussed "birthing" in all its forms. 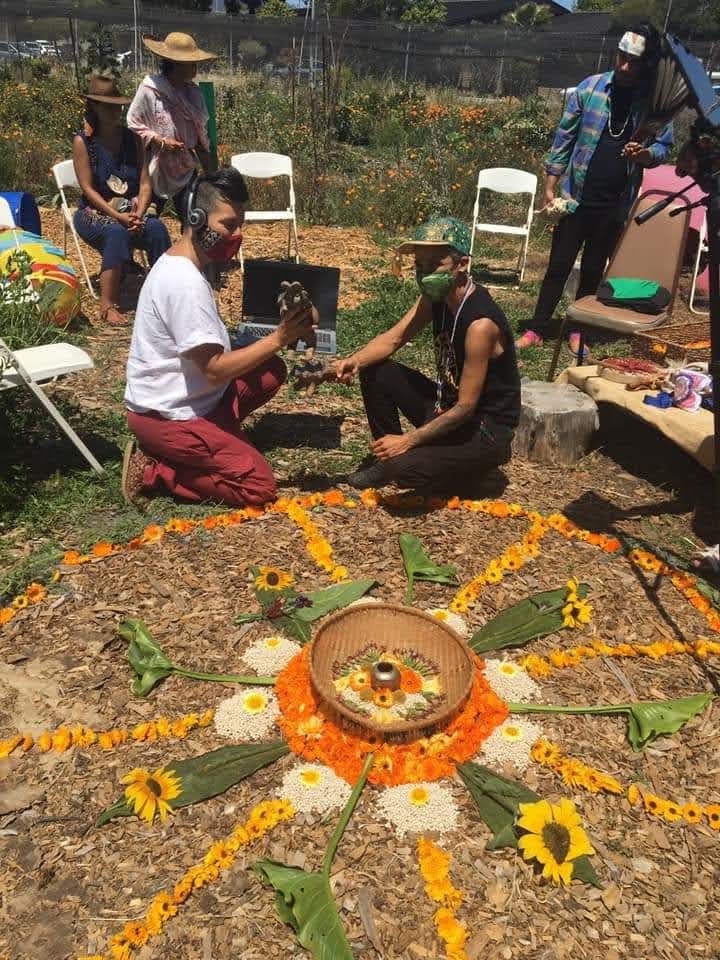 ​In June I offered "Queer Care" online for Ancestral Apothecary School in Oakland. This offering was in honor of the Stonewall Riots. Below video was played at the start of the session.
After 6 months of being on the coordinating committee for the Healing Clinic Collective's first TGNC2S Healing Clinic, here I am in October holding sacred space with my friend & fellow curanderx, Alma Rosa who came from New Mexico. 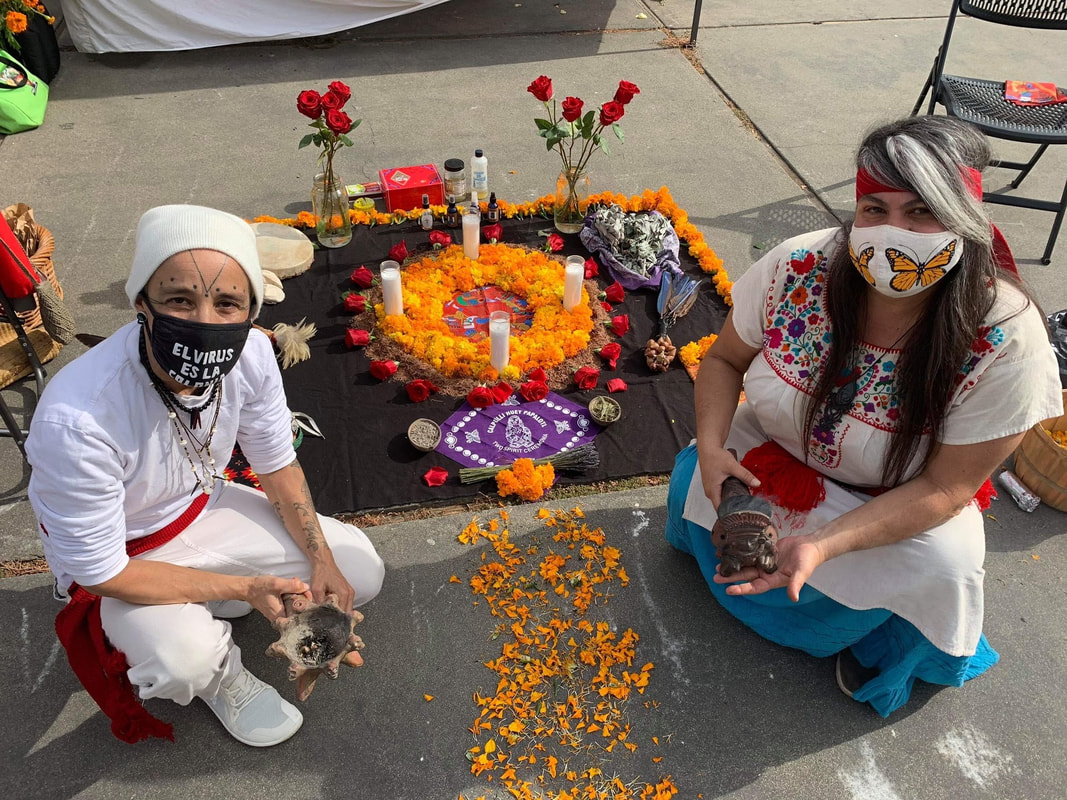 For me 2020 started off really sweet. The 1st day of the year we had a small gathering in our home. Five Boricua healers & artists & two young ones. We ate Bacalao, Platano & Aguacate. We laughed, sang & jammed out in our living room. Just 5 days later, two high magnitude earthquakes hit our ancestral land & an "earthquake swarm" was in full swing. Once again, my people were being devastated & in less than a week, I was preparing to fly to Borikén to participate in a gathering of change makers, healers & farmers facilitated by CEPA . After some initial doubt, I decided to follow through with the trip. I am so deeply grateful that I did, because I had no idea what was to come in just a few months time. I had no idea that by the end of March the entire globe would be wearing masks everywhere & spraying home made sanitizer on everything that came from "the outside." Even so, my knowledge of this came too late. Just 1 week after the shelter in place was ordered in CA, I got very sick with what I'm sure was Covid. It lasted for 3 weeks & even after that, the cough lingered & I seemed to tire more easily, but I kept on keeping on. Then, I woke up on Oct. 17th & whatever energy I had was gone. It was like I had been hit with a Mac truck overnight. Many of the symptoms I was having had me & my loved ones very concerned. A couple weeks into it, I was rushed to the ER with mini stroke like symptoms. As of January, 6th 2021, I am still recovering. I am also still smiling & laughing & loving. Why? Because I come from a people who since the 1400's has had to fight for everything. I am resilient & like my abuela, I know how to make beauty out of pain. 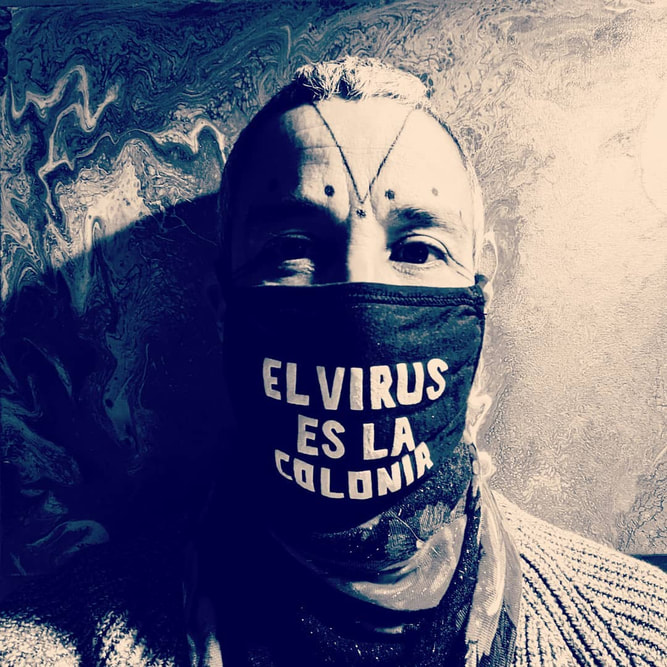 Selfie taken in Huichin (Oakland, CA) December 2020 - Background painting by Two Spirit Artist Tupili Lea Arreano, Mask "El virus es la colonia" by Agit Arte Cultural Works.
​
In early September, I got to participate in the making of a new music video for "Huracan" by Boricua musician & healer, Maria Jose Montijo. I created the altar for the video & I also got to perform as Huracan, the blue masked Taino Zemi/Ancestor. It was the most fun I had in the pandemic! Watch the full video below! 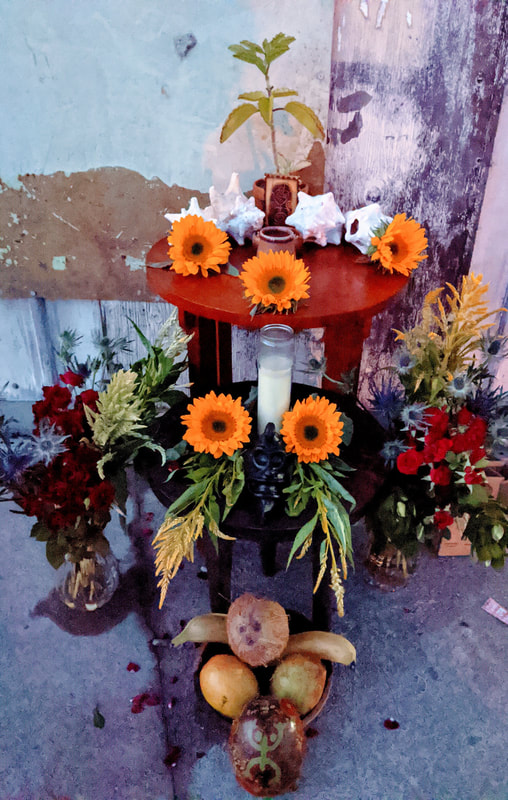 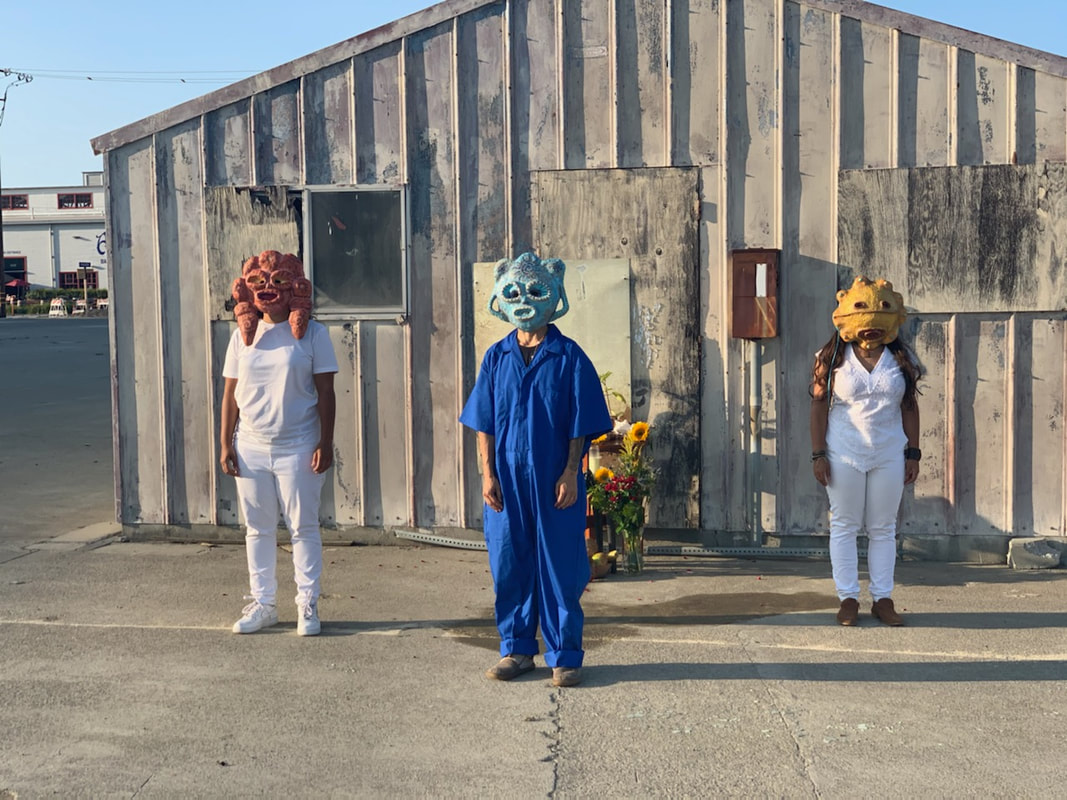 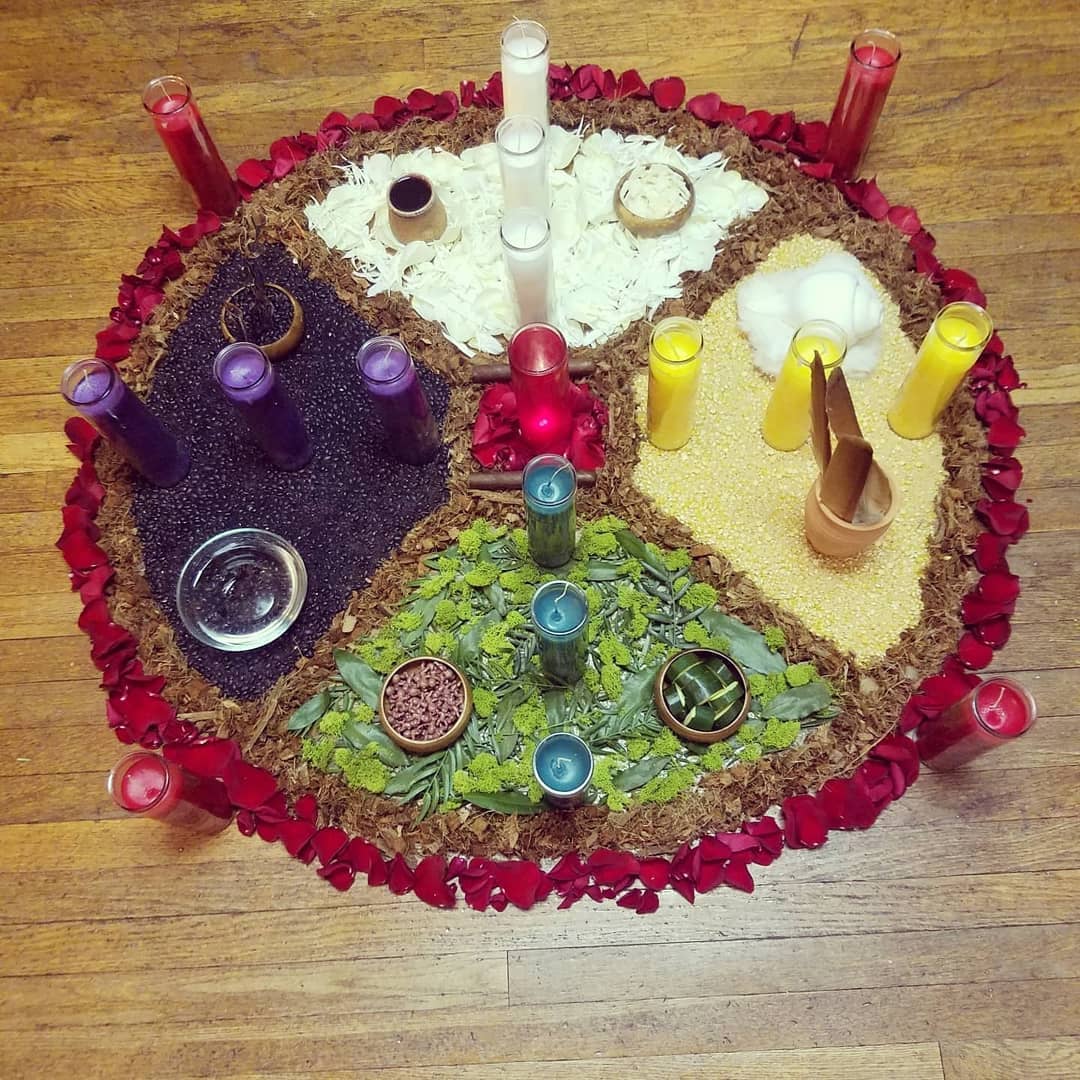 Altar created by RaheNi for one of the final sessions of their "Corazon Sagrado" series.
​
In mid September, ancestral and herbal medicine workers, Rosi Bustamante and RaheNi began facilitating a 6 month Circle for BIPOC exploring the teachings within Octavia Butler's "Parable of the Sower." Our intention was to support the "sowing" and strengthening of warriors, ready to forge our emerging future. We rooted out approach to this in the Medicine Wheel and its four bodies: physical, mental, emotional and spiritual. Participants developed personal goals to support these four bodies. It was a circle of growth, sharing and exploration, among folx committed to being the seeds that will blossom in the future.   ​ 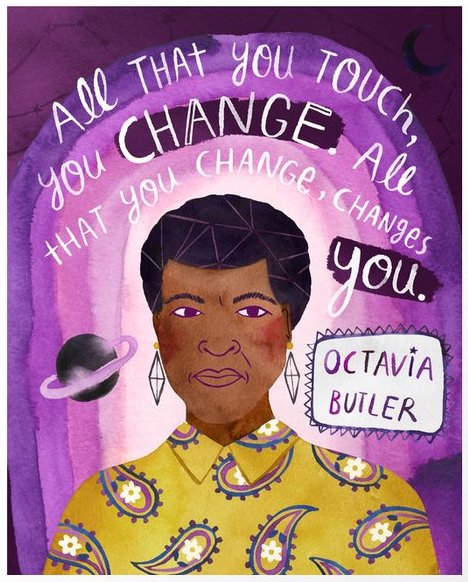 Image by Jade Frolics
Purchase Image
​In June Spirit Root Medicine People: Indigenous Two Spirit Lifeways, a decolonizing/healing project facilitated by RaheNi, Loa Niumeitolu & Zamora, was awarded the "So Love Can Win Fund" by the Akonadi Foundation. This made it possible for us to move our circles online & connect with folx from all over the US including Boriken! We were even able to invite a few exceptional Two Spirits to share their medicine at our circles. This included the one & only Kumu Hina! Below are a few of the flyers this grant funded. Flyers designed by RaheNi Gonzalez. 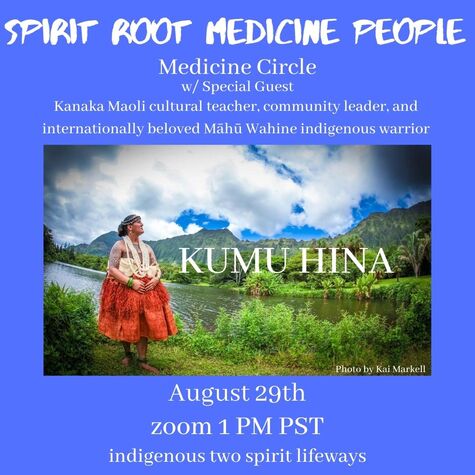 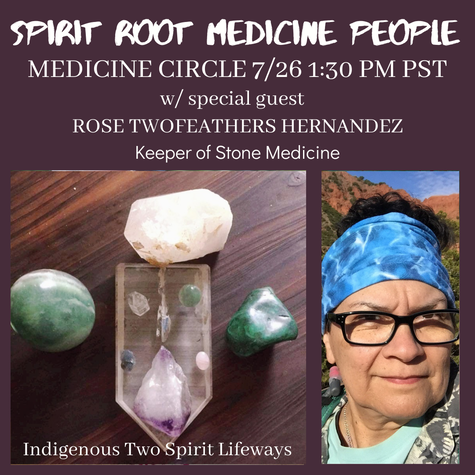 In November, I was invited to collaborate on a Two Spirit decolonizing/healing project with Loa Niumeitolu & Zamora. From that "Spirit Root Medicine People/Indigenous Two Spirit Lifeways" emerged & we began holding both public & private circles funded by the Alameda County Behavioral Health Department. From November through the end of 2019, we held many medicine circles including talking circles, drum circles, arts & community gardening. These circles are continuing to be funded through May 2020 & we anticipate that the funding will be extended. For updated info on our circles please visit our FB page or check my instagram. 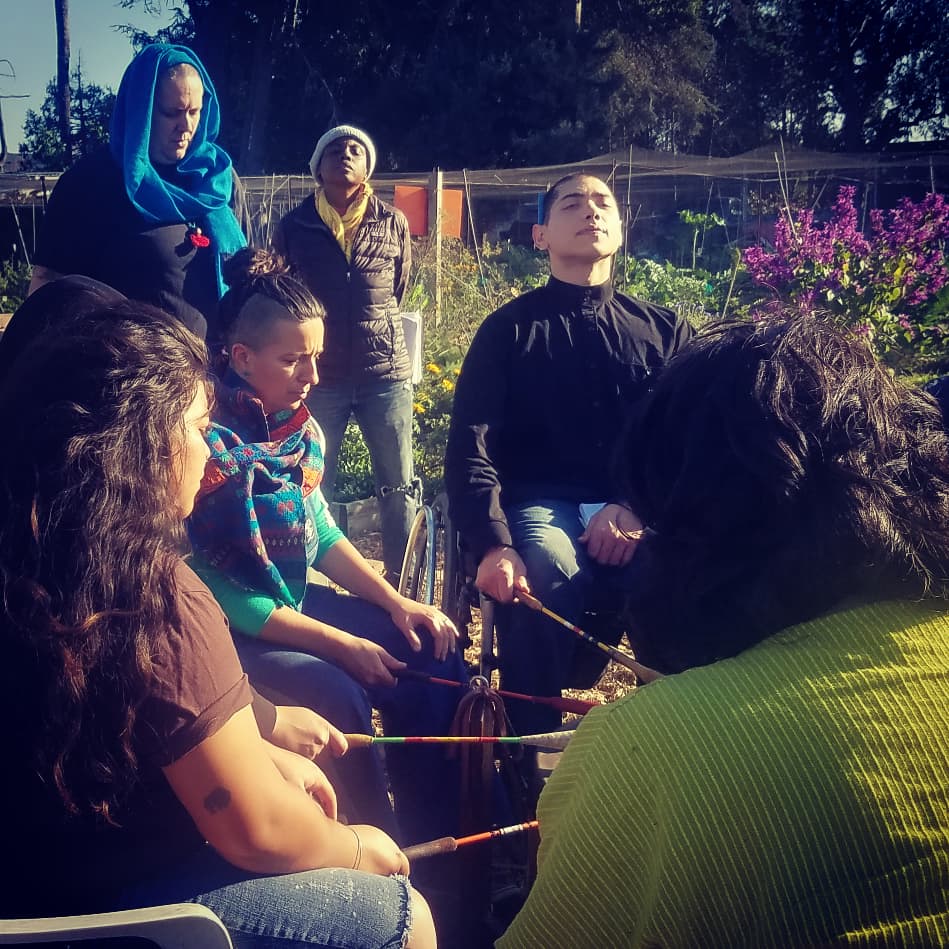 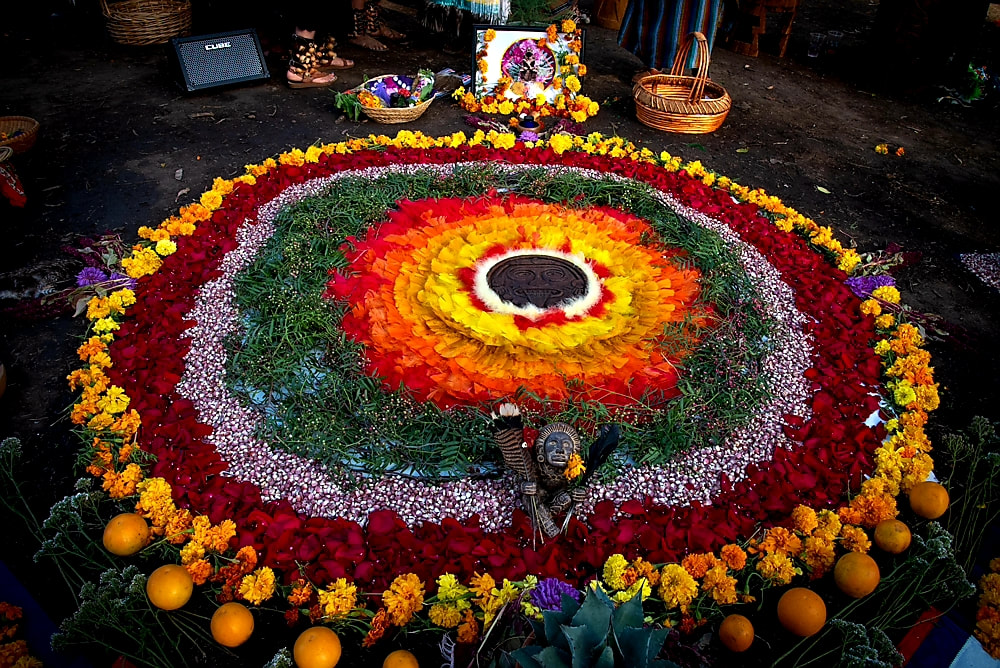 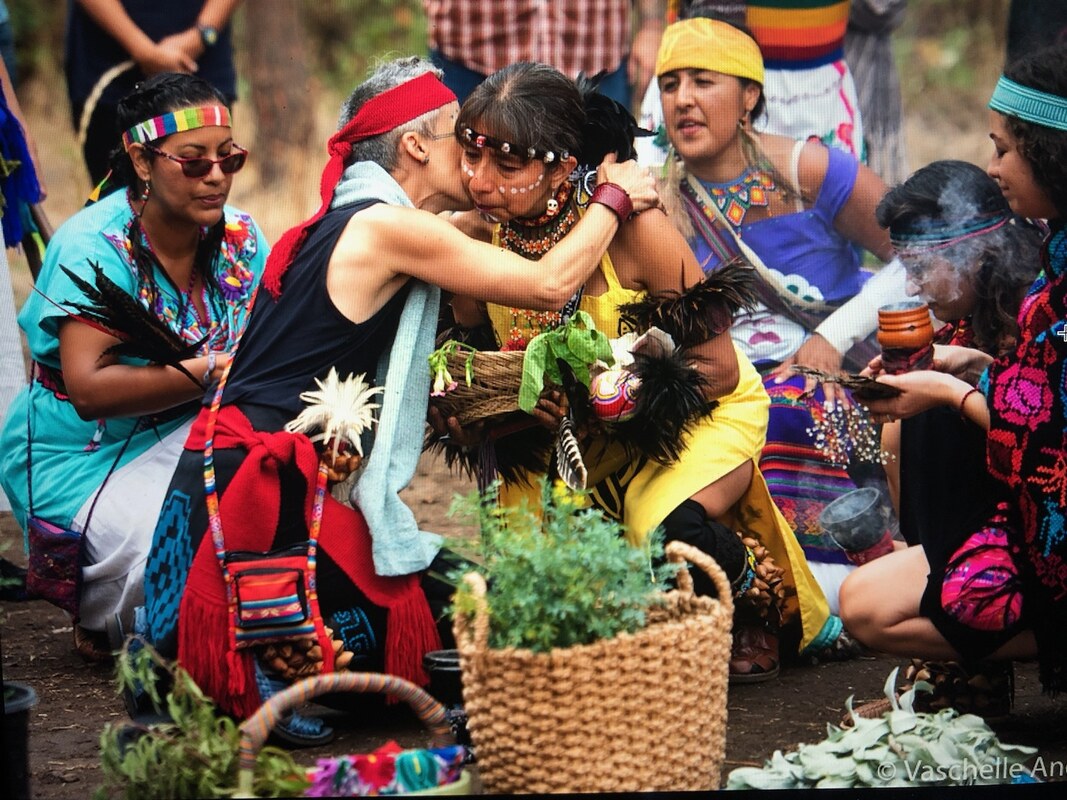 ​In August, Myrna Caban Lezcano & I started offering "Presencing Circles" at Soltree Alchemy in Oakland CA for POC & QTPOC. We've committed to offering at least one of these circles every few months. 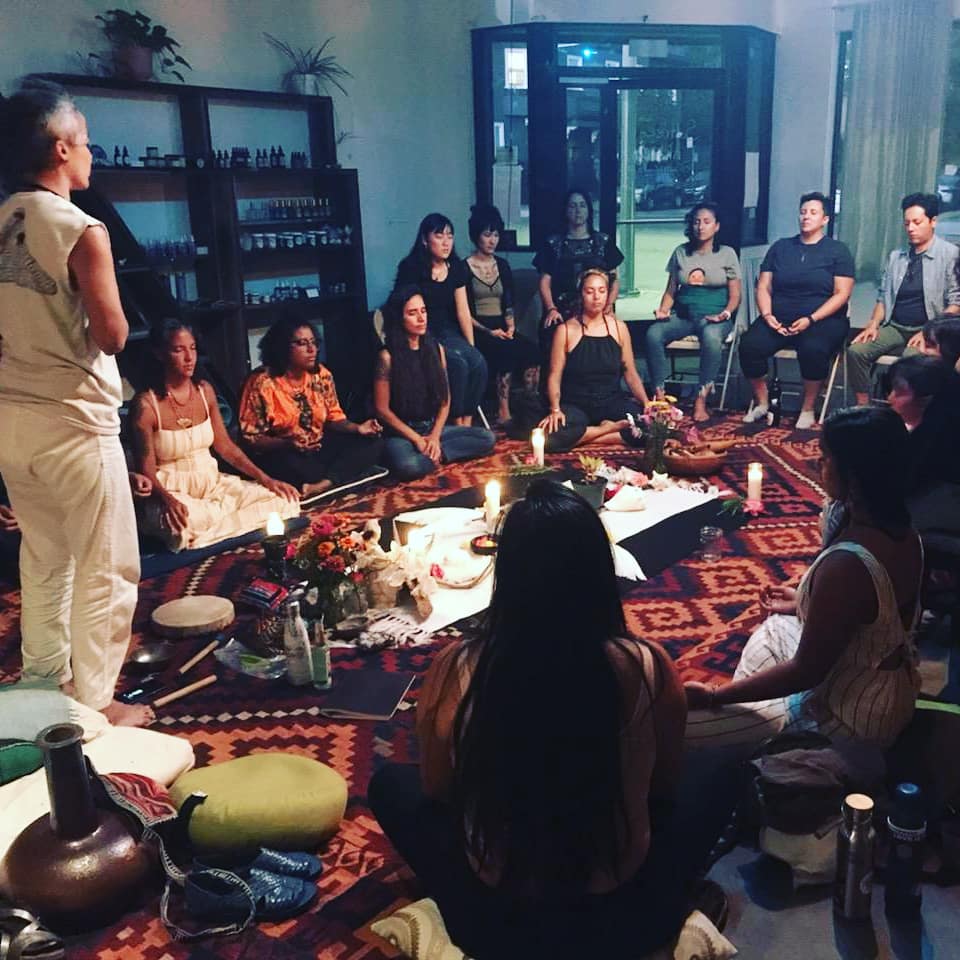 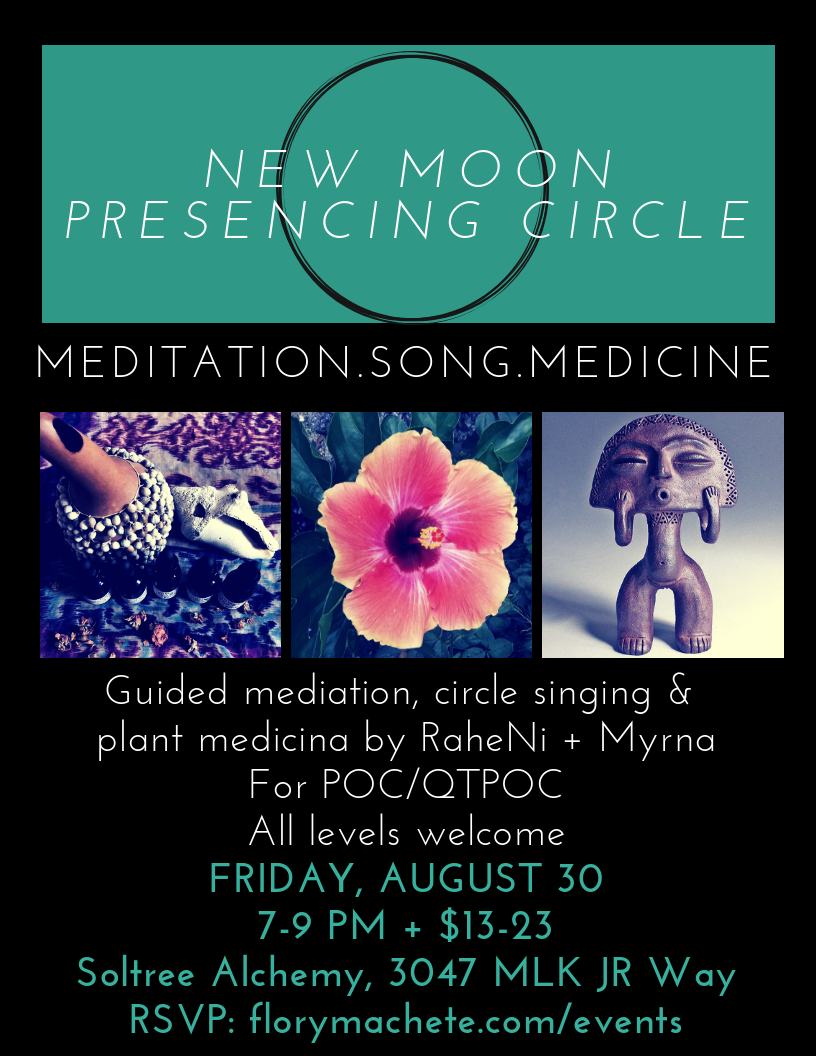 ​2018 Highlights
The entire month of October was spent in my ancestral land, Boriken (Puerto Rico). Myself & Myrna Caban Lezcano were the healing artist residents at CEPA. We offered 2 Queer Circles of Meditation, Prayer & Song. One of these circles also included a sacred pipe ceremony. I gave many limpias to beloved community members & helped create a medicine garden! Below are just a few photos of this healing justice journey & here is a link with full details: Community Healing in Boriken 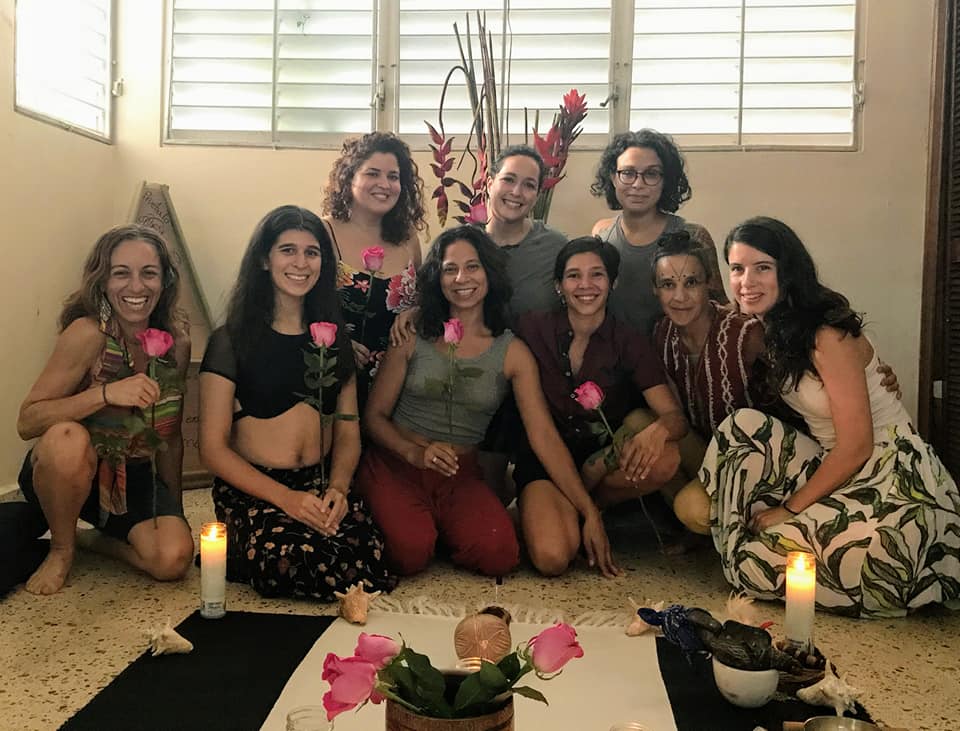 This prayer walk was held in solidarity with both the Standing Rock Lakota, Nakota & Dakota who were fighting the Dakota Access Pipeline and the Black Lives Matter movement.